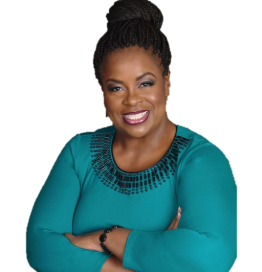 Juandolyn Stokes, M.Div.,M.A.C.E., is the Founder and Pastor of Deeper Life In Christ Ministries, Inc. in Conyers, Georgia. A native of Savannah, Georgia, her parents (Deacon Thomas & the late Elder Helen Stokes) nurtured her spiritual upbringing in the Church of God In Christ.

In 1981, she moved to Atlanta, Georgia to pursue higher education, where she matriculated at Clark Atlanta University (Bachelors, Broadcast Management), Beulah Heights University (Bachelors, Biblical Education) and the Interdenominational Theological Center (Masters in Christian Education & Master’s of Divinity). She received an honorary Doctorate of Ministry degree from American Bible University on last year.

Pastor Juandolyn Stokes is a noted preacher and theologian, travelling the country spreading the message and doing the ministry of the gospel. Her outreach work includes her establishment of Higher Calling Community Outreach Center, a food bank, clothing closet and training center for disenfranchised communities; and the Faith Journey youth mentoring program. She preaches to congregations of all faiths and denominations. As an educator & author, she has written many books, including What Have I Been Called to Do, Am I That Woman, The Closet: A Haven for Prayer, The Psalms: A Preparatory Study Guide, Exploring Old Testament Prophets. In 2011, she launched Stokes Center for Higher Education, and began writing and designing Christian Educational curriculums for churches, religious leaders and publishing houses across the country. She is a featured columnist for The Belle Report, an online gospel music industry publication.

She has a rich radio and broadcasting career, which began during her teen years in Savannah as Radio Announcer and Show Producer for WSOK Radio Station. She has continued to serve as announcer and producer during her tenure at the Sheridan Broadcasting Company (The Juandolyn Stokes Show), the Bobby Jones Gospel Radio program, and “Joy in the Morning” weekly radio show at WCLK Radio in Atlanta. She currently does inspirational radio features for the Earl Bynum Radio Show on Rejoice Musical Soul Food Network. Her rich experience in the gospel music industry has afforded her to work in the capacity of VP of Marketing, Radio & Promotions for numerous gospel labels, including Atlanta International Records and Star Song/Verity Gospel, just to name a few.

Currently, she is a member of the governing committee of the Gospel Announcer’s Guild of the Gospel Music Workshop of America, where she also serves as Chaplain; Education Committee member for the education division of the Gospel Heritage Foundation; advisory committee of the Richardson Ecumenical Fellowship of ITC. She does weekly inspirational features on the Rejoice Radio Network for the Earl Bynum Show.

She has received numerous honors and recognitions. In 2007, she was recognized by Gospel Today Magazine, as one of America’s New Voices. In 2010, she was honored by The Concerned Black Clergy, as a Woman in Politic & Pulpit. In 2012 Rev. Jesse Jackson & Operation Push awarded her with God’s Trombone Award, honoring her contributions to the church and community. In 2013, she was recognized by the Atlanta Gospel Choice Awards, for her ministry contributions. In February 2016, she was honored by the UNCF (United Negro College Fund) and received the “Outstanding Young Alumni Award” for her contribution to community.

Ministry is an assignment that Pastor Stokes take to heart. She believes that kingdom work involves sacrifice and servanthood, with a message of salvation. She has been called by God, commissioned by Jesus, the Christ and empowered by the Holy Spirit to be a prophetic and relevant messenger for this age. As a fellowship Pastor and Church of Christ-Centered Ministries, Inc, with Bishop Dr. Iona Locke, as Chief Prelate, she is humbly submitted and committed to being both an advocate and ambassador for our Lord and Savior, Jesus Christ, the Son of the Most High God!!

10:00 am - 2:00 pm Be Restored Worship Center
Leadership and Learning Forum
PREV NEXT